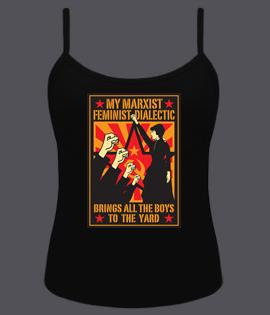 Margaret Thatcher was the first, and only to date, female prime minister of Great Britain between 1979-1990. Her economic policies transformed the British economy, causing great heartache, detroying Socialist Britain, and leaving a political legacy where the only acceptable 'left-wing' political party was New Labour (who brought pseudo-socialism for people who uncomfortable with the harshness of unrestricted capitalism). Her destruction of any true socialist movement in Britain, as well as her economic legacy amongst the lower-classes (mass unemployment, blame Maggie), has meant that the left has done its utmost to denegrate and belittle her. And, I am not unsympathetic towards this approach, but I think that perhaps this needs some feminist analysis.
Maggie T effectively created the current political agenda as well as the terms in which our economy functions. Despite a lot of anti-Tory rhetoric, no major political party has demanded a return to the nationalisation of industry, has given more rights to the Trade Union movement, or questioned whether a strategy of mass unemployment is a natural by-product of the capitalist system. Most major political parties, however, HAVE jumped on Maggie's bandwagon of describing those dependant on benefits as scroungers, scum, chavs and generally not worthy of consideration. They have all actively pursued reduced benefits and distanced themselves from taxation. No major political party represents the working-class anymore. 'Labour' now means middle-class; if you are not middle-class or striving towards it then you aren't worth representation. Now, for the left, this is not a legacy to be proud of, but in the last 30 years, no person has done more to transform the terms in which we do politics. Furthermore, it is the legacy of our only female PM.
What about our relationship with America? Yes, this has a long-history, but it was Maggie who actively distanced Britain's relationship with Europe and situated us alongside America. Where are our pro-European parties now? Oh, sorry don't exist. Blame a woman.
Yet, this legacy is not discussed or critiqued, which is hugely problematic. Our refusal to attribute our current political context to Maggie for the left is about denying a much-derided woman her political legacy, which is one of the only ways we can punish her for creating this situation (so it is understandable). But, because that political legacy is not attributed, it leads to a situation where we think the way the economy operates is natural, normal, inevitable. We think that politics has to take place under the terms Maggie set up, because we don't understand their history. And, the irony is, this makes her victory all the more complete.
So, how do we deal with Maggie? Maggie Thatcher, milk-snatcher; The Iron Lady; 'more balls than Brown'; 'more balls than the whole Nulab cabinet'; 'She is, on the contrary, a patriarch'; 'Mrs Thatcher disguised herself as a man'.
Whether she is being appraised from the left or right, Maggie Thatcher's legacy is that she was more than manly enough to have been prime minister. She had more balls than men of her generation or that following. She took milk away from small children (how unwomanly was that?). She presented herself in manly ways and convinced the nation she was more than a woman. And perhaps, it is true that Maggie did not conform to stereotypically feminine behaviour.
But, what does that legacy say to our daughters? I was a child when Maggie ruled Britain and I remember being told in school what an achievement it was to have a female PM, and I remember thinking that one day I too could be PM if I chose. Yet, by turning Maggie into a man, we remove the political legacy that Britain did have a female Prime Minister, and we can have one again. We create a culture where we say that politics is a man's game and woman have no place, and we remove the legacy of women on the way our society currently operates- so once more the responsibility for making our country what it is, is seen to have come from men. The significant role that a woman played in making Britain what it is today is being erased from popular memory. And that is bad for feminism, bad for women and bad for society.
*Before I begin, I am not politically conservative and do not support Margaret Thatcher's political ideology or the manner in which she transformed the British Economy and the political agenda up to the present day.

** Image H/Tip to Historiann, from this shop.

Posted by Feminist Avatar at 03:48

Good post.
I am 29, born in 1980, and have never known a socialist or left wing government. I consider myself left wing but if I'm honest with myself, sometimes I do not know what that means. I don't always know what the options are and I cannot see a way out of this capitalist rut that we are living in.
A lot of our political discussions, atmosphere, the way politics is taught in schools, take place within a framework of Thatcher's actions being inevitable.

As you state, this is a direct result of what Thatcher did, how she led the country and how she changed the political landscape.
That's a pretty good achievement, regardless of whether you like her policies or not.
I don't, I think she was awful for Britain and I think she's immoral. But that's because I'm a left winger.

Perhaps its time to run for PM- bout time we had a left-wing woman in charge!

I don't really care if a woman holds power in traditional structures, it's just shifting the deckchairs about the Titanic really. I'd also question Thatcher's political legacy anyhow. I'm not sure whether AN other Tory in her stead wouldn't have done the exact same thing. The whole free market libertarianism was a growing political movement BEFORE Thatcher came to power, she just surfed it. She's the Madonna of politics really.

Who is giving her a free pass? As it currently stands we are barely holding her accountable for her actions. We need to acknowledge her role before we can critique.

Perhaps she is the Madonna of British politics, but in that case so is Obama for the US Dems. Yet, it doesn't stop him getting the credit.

Well I for one haven't ever given Obama any credit (contrary to popular rumour I'm not on the Nobel prize committee). I am just sceptical about the idea that Thatcher invented free market libertarianism, and as ever, I'm going to recommend watching the excellent 'century of the self' series - widely available online - to see why the idea became popular at the time it did.

I'd question really the extent to which politicians, of any stripe, can direct a capitalist society. There are so many factors at play - and yes one of them is definitely ideology, but only one of them - that in the end governments are merely, as Gramsci pointed out, a committe for organising the affairs of the ruling classes. The ideology bit is how that's sold to us.

I agree that politician's behaviours are just reflection of society's (or powerful subsects of society's) behaviour. But, I also think that legislation is a powerful norming mechanism (although that may because it is frequently reactive, rather than proactive)- it sets the standard for acceptable behaviour. And as a result government's have a significant impact over cultural values.

So, I guess the question is to what extent is the law reactive or proactive; who determines what law is made (top-down, from-below, individual/ group pressure); and what is the role of the PM, and other politicians, in shaping that. And, if I could answer that in a blog-post I might even get a permanent job at some university somewhere!

btw, where can I get a vest like the one in your picture??

Click on the name of the shop next to the **, it's not highlighted for some reason, but it's a link.