These are my summary of an article, with quotes in apostrophes, printed in the 1920s in Ireland on women's rights within marriage, suggesting that perhaps our blaming has not moved as far forward as we imagine. Sorry for not copying it word for word, but that's time-consuming, and I'm lazy. Now, you also get to see what I get to do all day...
The Great Unpaid: State Endowment of Motherhood,
from the Irish Times 28/11/1922
This article is replying to something written by Evelyn Grogan (a man) who attacks the idea that wife and mother's have economic status. He says 'Most people consider a home and a husband of one's one worth something.' The article replies : 'Agreed. But unfortunately in its actual working the marriage contract means that a woman must consider these appendages worth everything- worth her leisure, her economic independence, her interests; all in fact that goes to the composition of the individual and differentiates it in some degree from the herd.' Before marriage, woman (who do not live in poverty), had friends, interests, ideals and leisure- a personality that made her desirable in marriage to at least one man. After marriage any quality not necessary to the maintenance '(not economic maintenance- the other more arduous kind)' of a home is crowded out and atrophied, excepting of course patience, endurance, self-sacrifice, which neither attracted your husband in the first place, nor will keep him.
'"Few husbands" (we are told) "deny something spent on amusement or special desires." (Oh, beyond praise these beneficent ones and blest their handmaidens who have found favour in their sight!.) Imagine the sensations of a man confronted with the privilege of "something to spend on special desires and amusements!" Imagine the temerity of her who would suggest that men could exist without clubs, hobbies, drinks or tobacco! 'No the money and leisure to spend on special desires are not a man's privileges- they are his inalienable rights; and by all the standards of an outworn convention the more "special desires" a man has and the more he cultivates their gratification, the more manly he is.' It is curious and instructive to realise that it is by the diametrically opposed process we get the conventional 'womanly woman' - 'one who has no interest apart from the care of her husband, her home and her children.'

The writer [Grogan] also comments that it costs a pretty to keep a wife, when what he means is a home, and this is true, but it costs more to keep a housekeeper.
There are exceptions- women who are not unduly handicapped by marriage- they are the well to do women, the women without children, endowed with a talent, that like murder, will out '(and incidentally command an economic market).' But nothing can redeem the majority of woman who depend on another's bounty, which marriage inevitably means. The contributor's suggestion that a financial agreement should be arrived at before marriage is fair but does not go far enough- it is not possible for those in straitened households. The only solution is the state endowment of motherhood- not 'a miserable dole like maternity benefit', but something that would prove of substantial assistance, not only to parents but the child- that "most valuable asset to the state", about whom so much is talked and so criminally little is done. KM. [Note: we have received several other articles on this subject and they will be published in due course.]
Posted by Feminist Avatar at 04:28 2 comments: 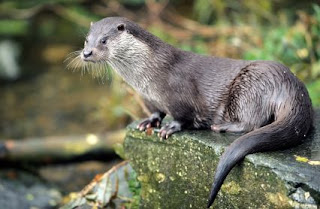 This otter has been stolen from the internetz, but tonight driving home a real live otter ran out in front of my car (and didn't die). It wasn't a baby, but it wasn't quite fully grown. I am so excited... a real live otter....

Posted by Feminist Avatar at 17:00 No comments:

Over at Bitch PhD, Ding discusses her decision to actively diet and lose weight, choosing to place her health above 'fat acceptance'. In her post, she talks about her struggle with choosing to diet, due to its implications for her feminism and her desire to accept her body the way it is. The fat acceptance movement is about helping women to love their bodies despite living a patriarchal culture that places a premium on being unachieveably thin. It is supposed to liberate women from obsessing over their body's seeming imperfections and to give them solidarity in that choice. It is meant to put women back in control of their own bodies; to wrest it from the grip of a patriarchal culture. Yet, increasingly, fat acceptance has come to mean never doing anything about your weight or body shape; never being allowed to change it. It is as if we are expected to imagine that our bodies just exist beyond or outside our control and we must just accept them, and never be actively seen to be adjusting them. If we do, we must dress up this choice as 'healthy' or about 'fitness'.

This is problematic as it once more removes a woman's body from her control. She is denied choice over what her body should look like or what size it should be. And, while our bodies can be frustratingly resistant sometimes to change (and certainly we are limited by our physiology), we do have some choices over what we do with our bodies, how we want them to look and behave. If we want to diet, we shouldn't have to say 'it's for health reasons', we should be able to say 'I am dieting because it's my damned body and I'll do what I like with it'. What this does not mean is that our bodies should be dictated to or that, because we can, we should change our bodies. It certainly doesn't mean condemning woman who have different bodies from us. It's about recognising that feminism is about putting us in control of our lives and our bodies and that we shouldn't have to apologise for what we do to our bodies.
Posted by Feminist Avatar at 06:55 4 comments:

2009 is the year of ending violence against women, so I thought a message from a victim of domestic violence may be appropriate.
Mrs Maud Coleman, Dundrum, to her husband, James Bryne Coleman, during their separation proceedings for his cruelty in 1906.
"If in the event of my death, you should marry again, take my advice and do not go to lawyers and friends to ask how to behave to your wife, but remember that she is a human being."
Posted by Feminist Avatar at 06:39 No comments: